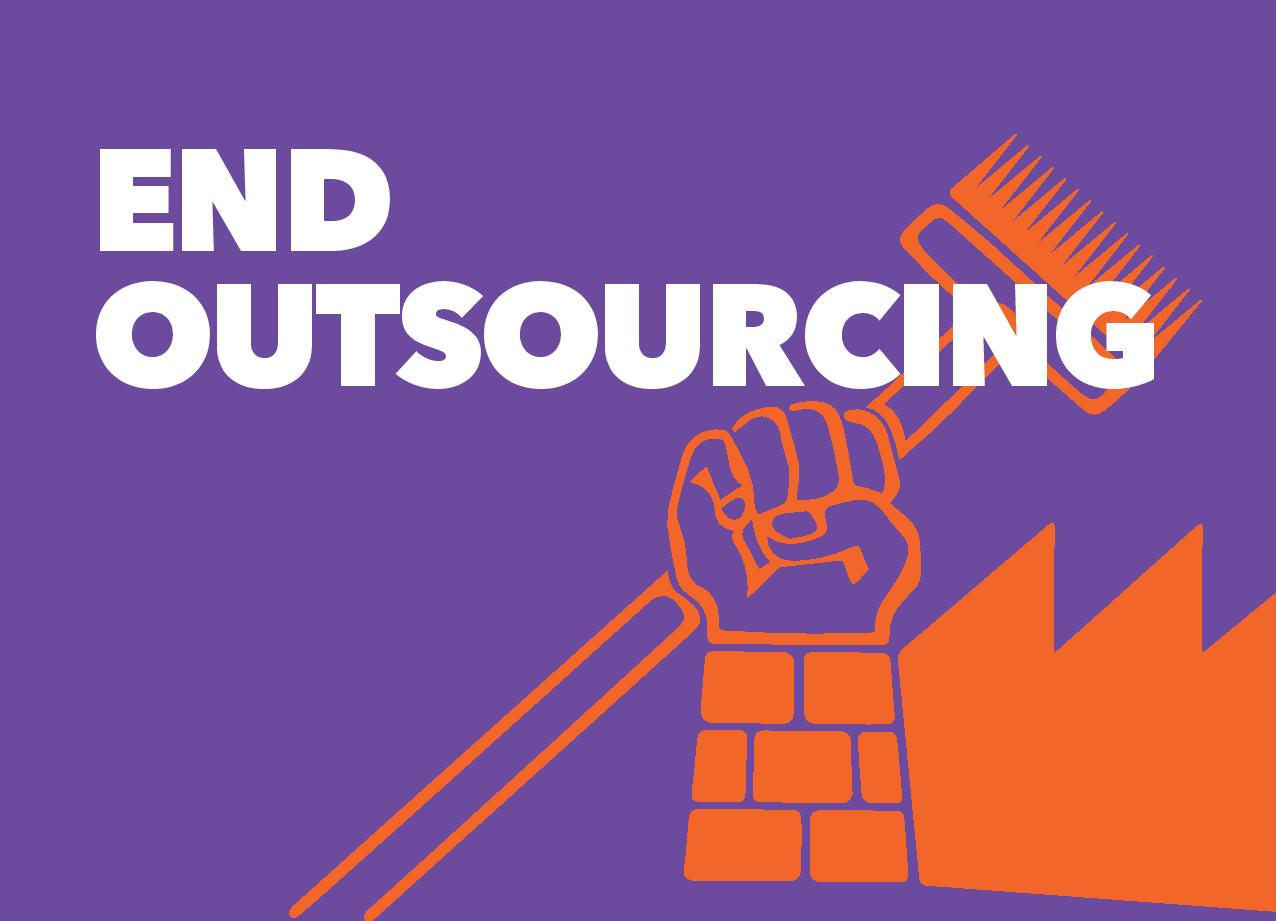 12 June was the 8th anniversary of the forcible deportation of 9 SOAS workers. This day has since become one of commemoration in the SOAS community, in order to condemn what was a horrific attack on the staff. Yet it was on the anniversary of these events that SOAS management once again proved itself to be interested in nothing other than profit, with complete disrespect for their workers by announcing the planned closure of the main building refectory on 1 August 2017. This will cause large scale redundancies and job insecurity among the catering staff.

Staff on zero-hours contracts are to be made redundant, with permanent staff being moved to hospitality. As of yesterday, staff have already received redundancy letters. Even those with contracts are being forced into precarious situations due to the overstaffing of the hospitality services. There has been no consultation whatsoever with members of the SOAS community who use the refectory, including students, academics and staff. This is not an isolated incident, but rather another juncture in what has been a long history of struggle for workers’ rights at SOAS. The outsourced catering staff work for Elior UK. It was demanded in January 2017 that these outsourced staff were to have their terms and conditions brought up to the same level as Bouygues staff, with an immediate end to all zero-hours contracts.  Follow up meetings were requested a further 3 times, along with an open letter on the 29th march to which there had been no response.

In response to the planned closure, SOAS students have occupied the directorate in the main building in solidarity with the catering staff at SOAS. The occupation has 5 demands:

A successful rally took place yesterday (13th June) in solidarity with the occupation, but crucially in support of the catering staff who are planning strike action before this year’s graduation ceremony.  Around 120 people arrived; a mixture of students, union representatives, and academic staff, to condemn SOAS management. Attempts were made to enter the occupation, but were stopped by an increase in security staff manning the doors. In response to this, SOAS management have sent out a generic email to all students and staff, now claiming “We have categorically not made a decision to close the refectory in College Building”. The lack of transparency towards staff in this process is unacceptable. There still remains no guarantee that the refectory will not be closed. Moreover, this does not explain the redundancy letters that have already been sent. SOAS management are now threatening the occupation with an injunction. This is an unacceptable response to a legitimate right of protest. Another rally will take place today at 5pm, and will continue every day until the demands of the occupation are met. 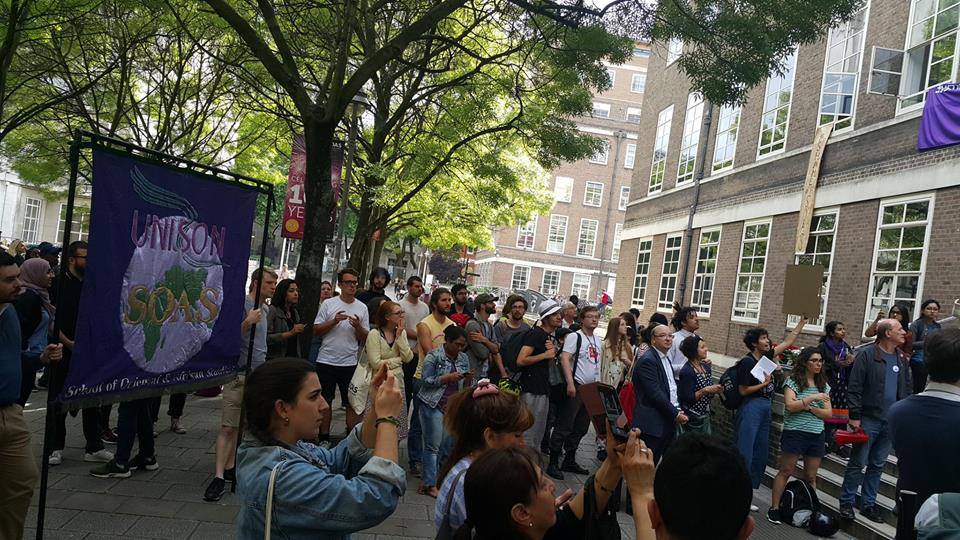 SOAS is a school which dedicates itself to the study of the so called ‘developing world’ in Africa and Asia. It is an institution which continually produces academic literature, talks and conferences against the exploitation of migrant workers, and the exploitation of imperialism and colonialism, but which itself practices exploitation of workers, especially BME and female workers, within its own institution. Maximizing profits in higher education has led to the casualization of labour- a direct result of the crisis of capitalism. The worker-student solidarity demonstrates the power of the working class once organized! We must defend the occupation, defend the rights of all outsourced staff and bring an end to the exploitation of all workers at SOAS. 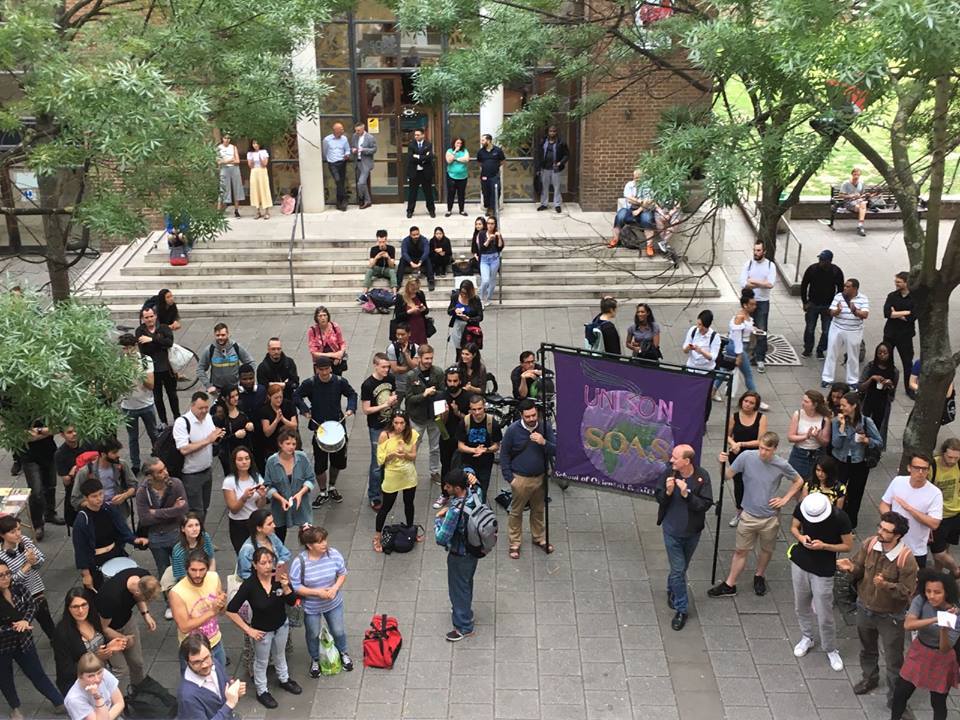