This weekend, on Sunday 6th September, the labour movement celebrates the centenary of the longest strike in British history, the Burston School strike, which ran from 1914 to 1939 in Norfolk.

The strike had the solid support of the local community of farm labourers and farm tenants and it was for that reason that it lasted so long. The two teachers at the Burston School were Kitty Higdon, who was the more qualified and formally the head of the school, and her husband Tom, who was also a Methodist and lay preacher. The Higdons had been sent to Burston after having been effectively dismissed from their previous school at Wood Dalling after eight years’ service.

Their teaching style was always aimed at raising the self-worth of their pupils by a more rounded and general education, not just focusing on the ‘three Rs’, as was common in schools for the poor. They hoped to raise the aspirations of their children so they were not automatically destined to be farm labourers or dairy hands.

The Higdons were also renowned for their kindness to their pupils and often paid out of their own money for food, clothing and even shoes for their children. This is something modern teachers would recognise as it becomes more and more common for children today to come to school without breakfast or adequate clothing.

In those days, the school management boards were appointed by the county council and were, in effect, self-perpetuating cliques, much like the committees of governors of academies and ‘free’ schools today. In rural Norfolk, this inevitably meant control by squires, parsons and well-to-do farmers.

These were changing times in Britain as the working class was increasingly organised into trade unions and began for the first time to express itself politically through its own party. In the 1906 general election, for example, the ILP won 29 seats, including one of the seats in nearby Norwich.

To the annoyance of the local gentry, Tom had helped to set up a branch of the Agricultural Labourers’ Union in Wood Dalling. What made matters worse was an altercation he had with a local farmer who employed a boy who should have been in school. Tom was fined for assault and the farmer later became chairman of governors at Wood Dalling School.

Apart from Tom’s activities, Kitty was formally reprimanded for having the cheek to light a fire to dry the clothes of children who had been soaked coming to school. The fire was only supposed to be lit according to a set schedule and only for limited periods of time. As it is today, bureaucracy and penny-pinching were more important than the needs of children. Using the unauthorised use of the school fire as a pretext, Norfolk Council sent the Higdons to Burston and arriving there, they found the school dilapidated and run-down.

It was clear from the beginning that they been pushed out of the frying pan into the fire. There were no branches of the Agricultural Labourers’ Union in the area and living standards were lower as a result. Many of the villagers were clearly poor and living in over-crowded homes.

As Tom later wrote in his autobiography, “Landlord, parson and farmer held sway over the Burston area in many respects more completely than in the district left behind.”

The Higdons soon got the goat of the local Rector who resented the fact that Tom was a lay Methodist preacher and that Kitty, whilst Church of England herself, went to Chapel instead of Church because of the tone of the Rector’s preaching. As he had done in the previous post, Tom quickly became active in organising farm labourers and, what was just as bad, he also began to organise them politically.

At the Parish council elections in 1913 – done by a show of hands in the school hall – all the nominees of the labourers were elected, with Tom Higdon getting the highest vote and the Rector the lowest. Despite this, out of only six members on the new Board of School Managers, Norfolk County council appointed the Rector, along with his wife, another local minister and two of his supporters.

The new managers soon fell out with Kitty when again she had the temerity to light a fire (in November!) when it was forbidden. This immediately triggered calls for her dismissal.

Finally in February 1914, on trumped-up charges of insubordination and excessive punishment of a pupil and before a tribunal made up of local Tories, Kitty was dismissed from her post with Tom with her.

Unknown to them, word of their dismissal had spread. The Burston pupils organised a march around the village and at a meeting voted not to go to any school with substitute teachers. Sixty-six out of seventy-two pupils supported the Higdons.

The parents also backed the teachers. At a torch-lit meeting on the village green they resolved to fight what they saw as the parson’s unjust victimisation of ‘their’ teachers and when Norfolk County Council sent in substitutes, they kept their children from school.

Instead, they set up their own ‘Strike School’ with their children taught by the Higdons in a village shop and later in a refurbished carpenter’s shop.

When the Higdons were evicted from their tied cottage, the villagers helped them store their furniture and goods until they found somewhere to live in the community. In lieu of wages, they made sure the Higdons had food, clothing and all the necessities of life.

When the good Christian Rector showed his spite by evicting tenants off small plots of Church land they leased – leased in some cases by the same families for generations – it only hardened the resolve of the local people to support the Strike School.

Despite all kinds of threats, intimidation and harassment, the big majority of the local people stood by the Higdons.

The strike gained momentum and achieved great notoriety, not only in Norfolk but nationally. It represented in microcosm the bitter class divide that was apparent across the whole country, even in the later war years.

Well-known figures in the labour movement, like Sylvia Pankhurst and union leader Tom Mann, visited Burston in support of the Higdons.

Support meetings were held in cities around the country. With political support came collections and financial support. Burston became a cause celèbre for the labour movement and a place of pilgrimage for trade unionists. The union banners of miners, railwaymen and steel workers regularly mixed with those of agricultural workers in marches in the area.

Union support and collections were eventually enough to allow the Higdons to buy land to erect a school building so the ‘Strike School’ could continue indefinitely.

When eighteen parents were taken to court and fined, public collections quickly paid the fines and parents were never prosecuted again.

Meanwhile, the Strike school continued, with all the normal discipline and practices of a proper state school – registration, lessons and learning, with appropriate punishments for misbehaviour and rewards for good work.

Burston, like every other village, town and city in Britain, had been caught up in the war fever of August 1914 and, ironically Tom Higdon, too old himself to enlist, was an avid recruiting sergeant for the British Army. But the bitter class divide continued throughout the war, leading to a farcical melée in the Church in 1917, as the parents of a dead soldier objected to their son’s memorial being erected in the Church.

The Burston strike raised the self-esteem and confidence of farm labourers far and wide. Even during the war years, branches of the Agricultural Labourers’ Union proliferated, no small thanks to Tom Higdon, who remained an organiser and official of the farmworkers union throughout the rest of his life.

The Strike School was to continue, along with the campaign to reinstate the Higdons, for another 25 years, always sustained by the solidarity of the labour and trade union movement and indefatigable resolve of the farm labourers of Burston. Eventually, in 1939, with Tom’s death at the age of 70 and the outbreak of war, the strike was called off.

But as we pay tribute to the courage of Tom and Kitty Higdon and to the tenacity and solidarity of the Burston struggle we do not do so only for sentimental reasons. Today, public sector workers, including teachers, face attacks on their conditions and living standards that are unprecedented in their lifetime.

The abolition of national pay scales, performance-related pay and the imposition of intensified bureaucracy are all making daily life for teachers unbearable.

For many, bullying, intimidation and favouritism have become the main methods of school management. Older teachers, and especially women teachers, are being hounded out of the profession.

The determination, solidarity and willingness to fight for their rights which were so characteristic of the Higdons and Burston farm labourers in 1914 are absolutely vital for the labour movement in 2015. 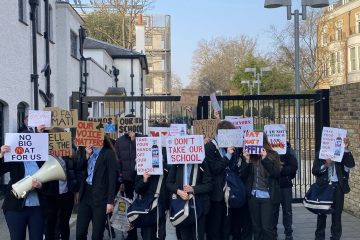 Staff, students, and parents at Holland Park School in London are organising to oppose the proposed takeover by a giant academy trust. To defend education, the labour movement must fight to end academisation, and put workers in control.