A woman’s place is in the revolution: new pamphlet for International Working Women’s Day

We’re delighted to announce the publication of a new pamphlet, edited by Natasha Sorrell of the Sheffield Marxist society, to celebrate International Working Women’s Day. 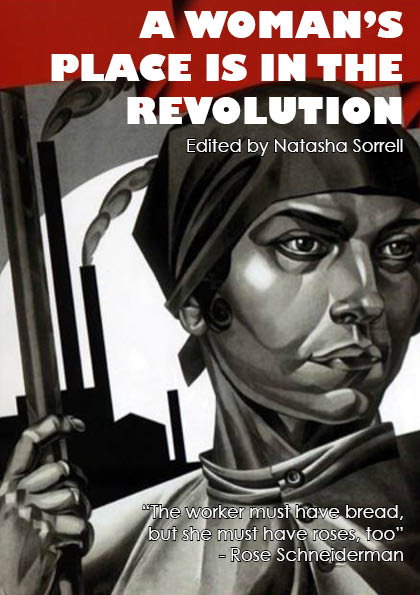 The pamphlet contains an introduction by Natasha which discusses the lessons that can be learned from the history of the struggle of working class women. Natasha explains how today’s fight for the emancipation of women is the fight for socialism.

Next is an interview with Lenin conducted by Clara Zetkin, the German Marxist, about the oppression and emancipation of women. There’s a lot we can learn about today’s struggle from Lenin’s advice, ideas and tactics which are contained in this interview.

The fourth article is a history and explanation of the history of International Working Women’s Day by Alexandra Kollontai, the Bolshevik revolutionary. Kollontai draws out the radical history of the struggle of women against exploitation and oppression and concludes her article with the rousing cry of “Forward to the international unity of working women and male workers in the struggle for the dictatorship of the proletariat – the proletariat of both sexes!”

The penultimate article in the pamphlet is by Rosa Luxemburg on women’s suffrage and class struggle which clearly explains the link between the fight for socialism and the fight for the emancipation of women.

And the final article by Christina Gridley and Carolyn Kemp is titled “Women in the Paris Commune”. This is an inspiring account of the role of women in the first instance in history of the working class taking power into its own hands. This is an article rich in lessons for our continuing struggle today.

The pamphlet will be available from local Marxist societies, many of which will be holding meetings this week to celebrate International Working Women’s Day. It costs just £1. If you’d like to order a pamphlet and have it sent to you just fill in the form below – postage will cost an extra 50p.