Published by Marxist Student on February 1, 2017

Roald Dahl’s Charlie and the Chocolate Factory predates almost all my political knowledge, and the capitalist undertones of the novel could hardly be interpreted and analysed by a seven-year-old. As the question of class and race became an increasingly conscious factor in my political outlook, however, the connotations of the Oompa-Loompas being shipped from Africa and paid in chocolate did not sit entirely comfortably; and yet my limited knowledge of socialist ideas and the history of the slave trade meant that most of this allegorical meaning was lost on me.

The setup in Dahl’s book, in fact, can provide a useful example to demonstrate the economic ideas of Karl Marx – and in particular his theory of surplus value. This is the theory, ultimately, that workers are paid (in wages) only a fraction of the value of the product they produce. The rest – the unpaid labour of the workers – is the surplus value, which goes to the capitalist in the form of profits. Workers are led to believe that they are paid fairly. But a productive worker is actually paid less than what he or she produces.

Let us see how this applies to the situation in Charlie and the Chocolate Factory. The Oompa-Loompas are paid by Willy Wonka – the business owner – in chocolate. Immediately we can see the exploitation. Imagine that a single Oompa-Loompa makes, on average, 10kg of chocolate in a day. But these hard workers are then each paid with just 2kg of chocolate, leaving 8kg for Willy Wonka, the capitalist, to sell at a profit.

The presence of a welfare system within the company allows the Oompa-Loompas to feel that they are being treated well (though whether or not dental care is provided is left up to the imagination), when in fact Willy Wonka is profiting considerably from their labour.

Moreover, under this capitalist framework, Wonka would – and could – never pay the Oompa-Loompas the full value of their labour, otherwise there would be no surplus from which he could make his profits. And, at the end of the day, as a capitalist, our infamous chocolate company owner is only in business in order to make a profit.

Wonka would likely return the argument, were Marx to criticise his exploitative ways, by claiming that he – as the person organising and arranging labour, along with dealing with the intellectual and creative side of chocolate production – has a right to a larger portion of the revenue, as the company would not exist without him.

But, in reality, it is the workers who are vital: without them, there would be no production (and thus no chocolate) at all. Each and every worker is pivotal in production; if anything, the physical production of the chocolate is even more demanding than the creative side. At most, therefore, Wonka should only be entitled to the same wage as the rest of the chocolate factory workers as compensation for his managerial duties.

Perhaps Wonka would attempt to highlight his benevolence towards his employees – for example in giving his workers full creative musical freedoms with regard to singing songs about Augustus Gloop (suggesting a union movement). But such “freedoms” are only a fig leaf to cover capitalism’s economic exploitation of the workers.

The vision for Marxists is socialism: a society in which the means of production are commonly owned, with an end to private ownership, competition and production for profit. In a capitalist society, as Marx noted, the free competition of the market actually leads to the creation of monopolies, as it has for the chocolate sector in Charlie and the Chocolate Factory, where Wonka has blown all competition out of the water.

Furthermore, as Lenin explained, there later develops “state monopoly capitalism”, whereby big business is able to twist governmental policy in its favour, leading to a greater fusion between the state and the major capitalist corporations.

Wonka has created such a monopoly. After years without being seen in public, he is still the face of chocolate production and has even managed to get a small army of Oompa-Loompas smuggled into the UK, presumably with the tacit collusion of the Home Office. This suggests that Wonka’s business has become such an important monopoly within the wider economy that the government has allowed Oompa-Loompas to come to Britain without any documentation. Beyond this, Wonka is able to pay them with chocolate rather than money, which suggests the bending of the law – if not the breaking of it.

Wonka would no doubt argue that this laissez-faire deregulation is beneficial, allowing competition in the market. In fact, however, this has resulted in quite the opposite: the total lack of competition and the government kowtowing to Wonka’s whims. The logic of capitalism has created stagnation in the development of industry and technology.

A new radical adaptation of Charlie and the Chocolate Factory seems unlikely; an ending in which the Oompa Loompas seize the means of production remains a pipe-dream for us Marxist enthusiasts of literature. But, in this year in which we mark the 100th anniversary of the Russian Revolution, perhaps a celebratory new edition is in order? 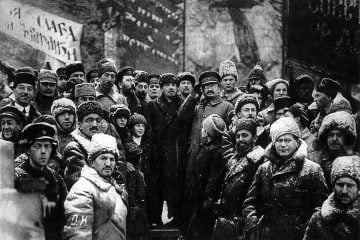