This Wednesday morning, comrades from Newcastle Marxist Society made their way to County Durham to show solidarity with the striking teaching assistants. We got a bus through from Newcastle which sadly, due to poor weather, meant we arrived a little too late to join the picket line at East Stanley School.

After discussion with some of the workers there, the receptionist contacted the rep for the school and she kindly offered us a lift to a rally being held at the nearby town of Consett. This gave us the opportunity, en route, to talk to two teaching assistants involved in the organising of the strike action. They told us of the initial general reluctance of their unions to organise resistance to the proposed pay cuts, which often amounted to a reduction of up to 23% of their wages. They also described the way in which the national and regional leadership of the unions had been surprised by the militant mood of the teaching assistants, which led to 93% of Unison members voting in favour of industrial action, but soon came to support the last month of escalating pressure on the council to reverse these proposed cuts. The TAs spoke of the fact that their long perseverance had understandably begun to wane throughout the dispute, but was buoyed up and renewed by coming together with their colleagues at rallies and other organised events. They emphasised that public support, as well as solidarity from local groups, encouraged them to continue in their struggle. 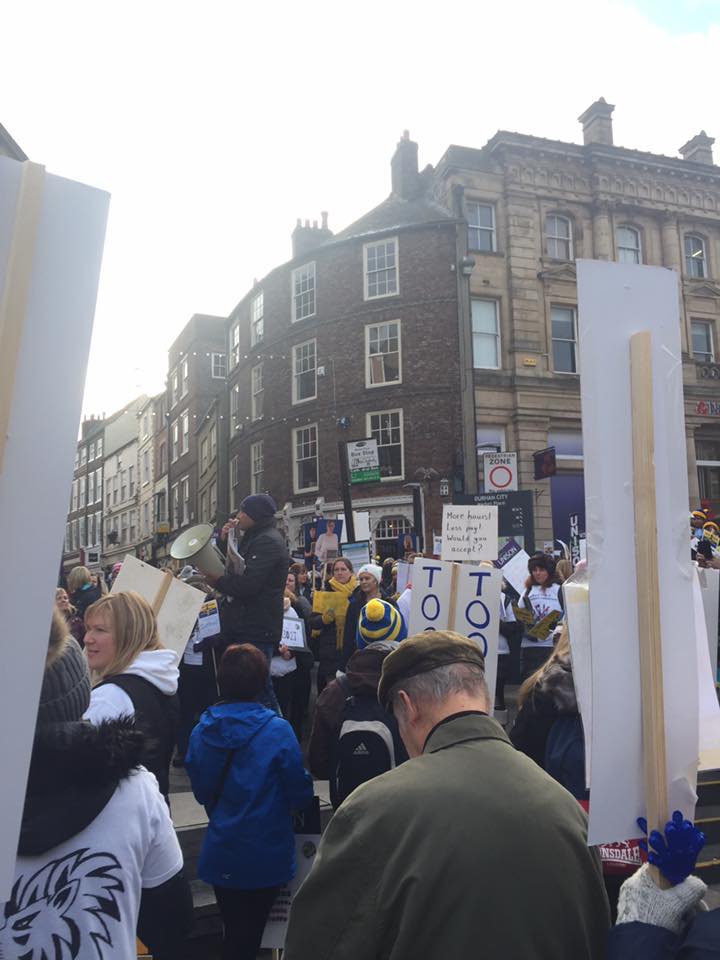 This was one of the reasons that the decision had been made to organise a joint rally after the picket lines of the morning. The strikers picketed their schools from 8.30am until approximately 9 or 9.15am, whilst parents were dropping their children off at the schools and whilst people were going to work. Because many of the schools were on backroads and not visible to the public it was then decided to organise a joint rally, for the strikers to come together, and demonstrate in Consett at 10am as a means of reaching out to the public.

When we arrived at the rally, we were received very warmly by over 100 TAs who had turned out to voice their opposition to the cuts. Despite the blisteringly cold weather, the mood was defiant, and public support was vocal. As Durham and Newcastle Marxist societies have been discussing and organising around this struggle for some time, what became clear is the value of the forging of links between ourselves and the workers involved in the industrial action, and the importance of us standing together against the attacks and pressure from the council. Whilst it was assumed by those who enacted the cuts that the workers would take this lying down, the Durham TAs have made significant progress in building to reverse the policies which would leave them struggling to maintain a basic standard of living. From our experience on the picket line, they now look ready to fight to the conclusion of this struggle, and Newcastle and Durham Marxist societies will be standing with them until the end. 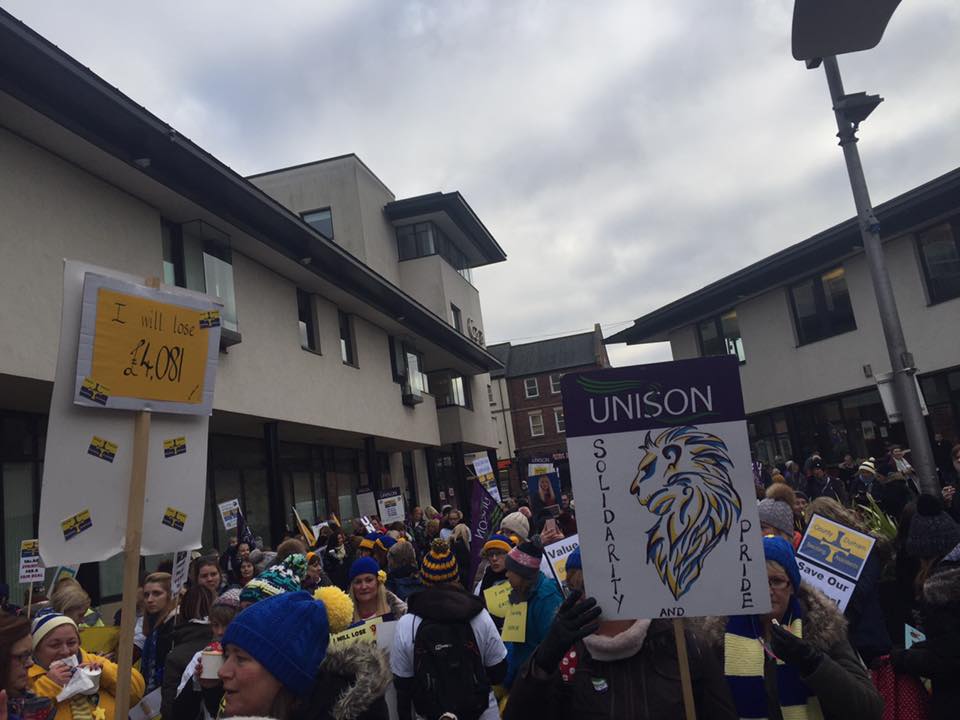 Over 100 schools were picketed throughout the morning, followed by several rallies in different localities across County Durham, on day one of this bout of strike action.

On Thursday the 24th of November, the second day of the strike, the decision was taken by Unison and the ATL, the unions involved in the struggle, to hold a joint picket outside of Durham County Hall instead of individual picket lines at schools across the county. This was in order to bring everyone together for one big show of strength and to pressure the council into coming back around the negotiating table. 900 TAs and their supporters stood shoulder to shoulder holding placards surrounding the roundabout entrance to county hall and the show of solidarity by passing motorists, honking their horns and waving was heartening. 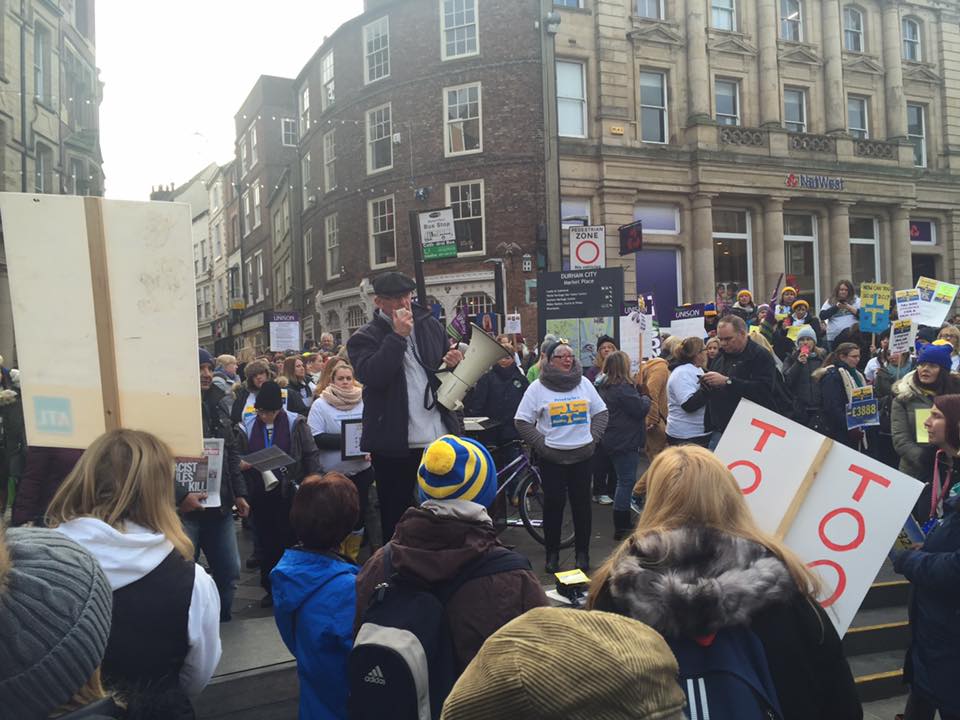 Following this demonstration, at about 11.30am, the workers marched into town across Framwellgate Bridge and into Market Square to hand out leaflets and engage the public. Durham Marxist Society were on hand to report on the day’s events and to offer our support and solidarity.

One thing that we have to note that the proposed pay cut is not a matter that can simply be dealt with by cutting down on one’s expenses. This pay cut will significantly damage the well-being of the TAs and also that of their family. Susan, who has been a teaching assistant in County Durham for 17 years, will lose £4600 a year if she is to stay on the same hours. This would go down by less, £2200 a year, if she works an extra four and a half hours more a week. At the demonstration she explained that she is fighting for her family and for the future of her grandson who needs extra help and support. If she takes the cut, her grandson will lose out on much needed support and the help that he needs. 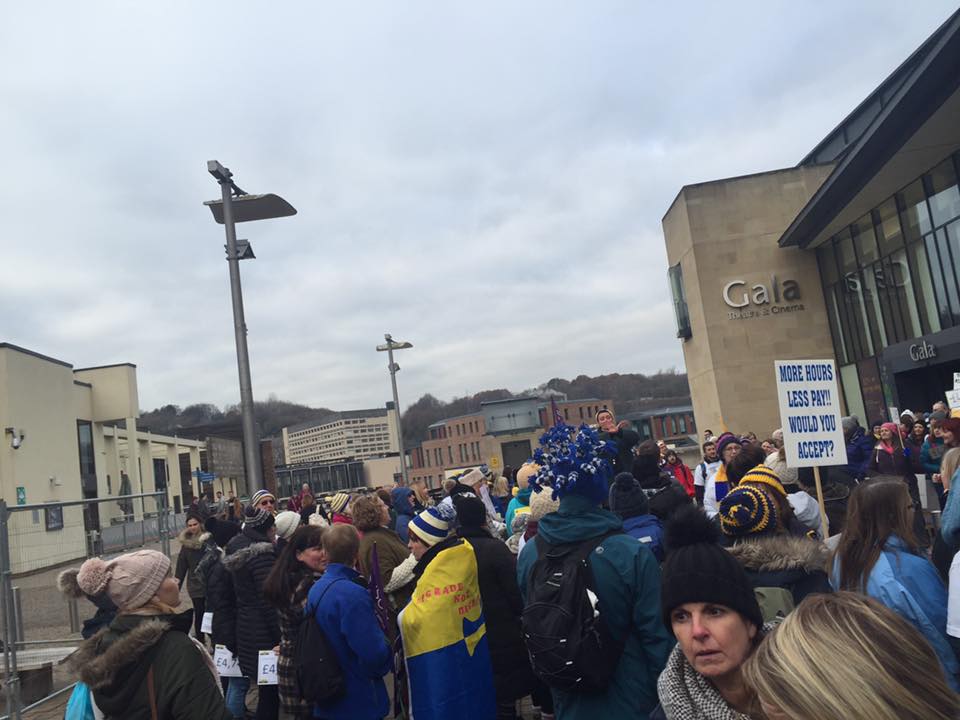 Consider Robert and Claire who are both teaching assistants in the county and who are set to celebrate their first child’s first birthday this December. They will lose £3848 a year and £4190 a year respectively. They have waited for years to reach a point in their lives where they are financially stable enough to buy their first home and had planned for Claire to work 3/4 days to look after and care for their new born baby. However, they’ve said, with the proposed cut this plan is no longer possible as they won’t be able to afford to keep their home. They said that it feels like Durham County Council have set them back years.

This is the fourth day of strike action organised by the unions as part of the current dispute. In support of their decision to fight, Durham Marxist Society stood in solidarity with the Durham TAs in Market Square today. It was inspiring to meet the TAs who are so well organised and have a deep appreciation of the classic trade union value that “an injury to one is an injury to all”. All of us were standing in solidarity with and for each other against this attack. It may be that Durham County Council might have decided to target the TAs with this pay cut because they thought that they would be easy prey. If this is the case we have to say that they have made a grave mistake. We have experienced first hand that the Durham TAs are not only determined to win this struggle but they are also well organised to achieve this goal. The Durham TAs are not the easy prey they were thought to be by Durham County Council but rather they are lions. If you step on a lion’s tail they will roar and fight back. 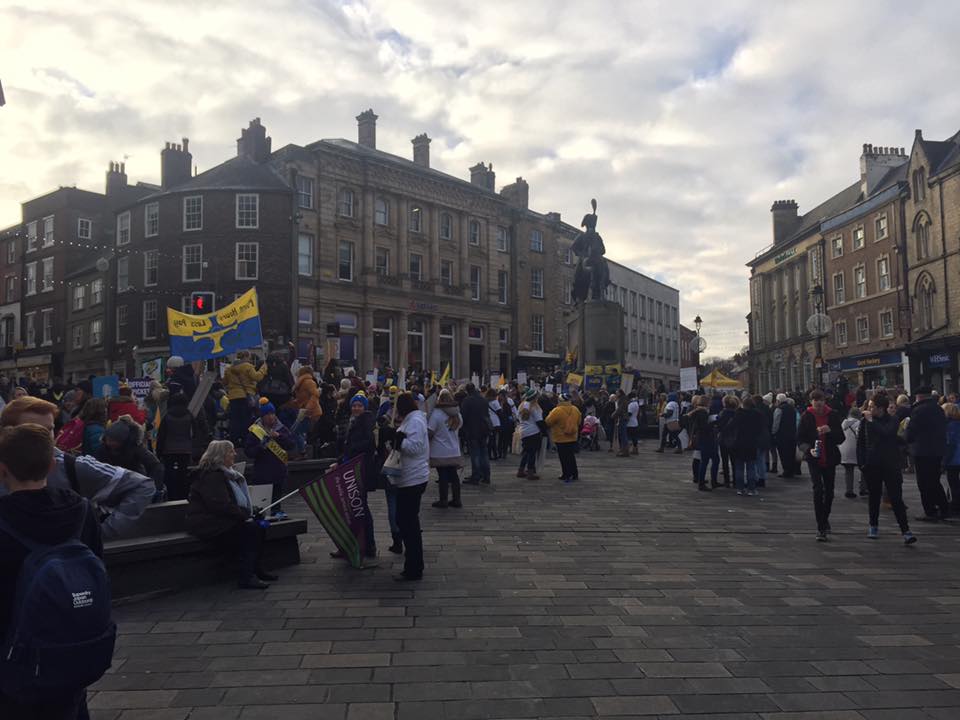