At the start of the Covid-19 crisis in April this year, Stephen Toope, one of the country’s highest-paid Vice-Chancellors, informed university workers that ‘savings will need to be made’.

Now, the University is going on a sacking spree. Not only university departments, but university-affiliated organisations and colleges have ruthlessly started laying-off their staff members. Ironically, redundancies include front-line staff who have risked their lives during the COVID-19 crisis to keep the workplace safe and running.

The latest news about massive job losses at Queens College was reported in the student newspaper. A leaked document revealed 35 planned redundancies, further labelling 93 staff as ‘at risk of redundancy’ at Queens. The college has £48 million in its endowment. Despite being registered as a non-profit charity, Queens College is making £2 million in annual profits – this is after remunerating its senior bosses in six-figure salaries. After Queens, leaked reports started arriving from other colleges including Downing, Trinity, King’s and Sidney Sussex.

Downing college sacked 27 out of a total of 182 staff members, and further reduced wages and conditions of 56 staff members. Trinity College, one of the wealthiest colleges in Cambridge with a £ 1.3 billion endowment, is planning to sack 50% of its housekeeping staff.

This is just the tip of the iceberg. The recent redundancy figures do not include staff on casualised and zero-hour contracts. Most of the University departmental staff in the lower grades are casualised and are sent home just over an email on a day’s notice. The remaining staff in longer-term or permanent contracts are sacked under the banner of ‘Organisational Change’. 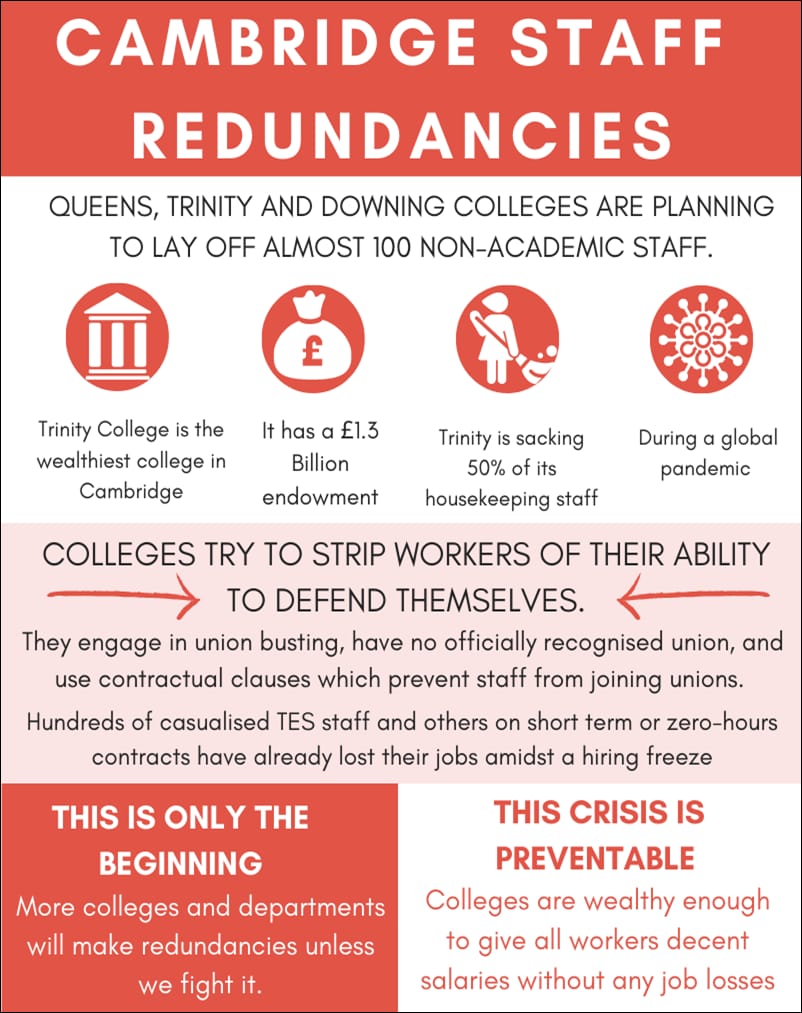 The University can afford to pay

The redundancies are happening when the University is accumulating 2 to 3 billion pounds in various donation campaigns. Furthermore, Cambridge colleges are sitting on endowments and assets amounting to billions. The University and colleges have enough resources to fund decent salaries to all its staff without making anyone redundant.

Meanwhile, the land owned by Oxford and Cambridge is valued at around £35bn. Queens College, which was the first to announce redundancies in Cambridge, has more than £48 million in reserves. These vast sums of money have shielded them so far, but with a massive drop of international students applications – which provide ⅕ of income for UK universities as they often pay double in tuition fees – even these wealthy organisations face financial troubles.

Their response to this has been to lay off staff, long before thinking of cutting their own benefits and bonuses. But even with a decrease in income, these colleges have more than enough money to retain their staff and serve the purpose they were designed to serve – provide education for the people. Instead, they hoard their wealth, reward the few at the top and show utter disregard for the lecturers and students.

Apart from having a devastating impact on the lives of the staff that will be laid off, these redundancies and accompanying austerity measures at the colleges, will have a huge impact on the living and working conditions of the remaining staff and students. These non-academic workers are as essential to the functioning of the university as academic staff.

The current redundancies being announced by various Cambridge colleges will not be the last and are far from being the first. This is true not only of the sector of higher education but of all sectors of the economy. We have become accustomed to austerity and the redundancies that accompany it since 2008, since the latest crisis of capitalism.

The current crisis cannot be attributed to COVID-19 on its own, no matter how many times the bourgeoisie claims that nobody could have predicted the pandemic. Capitalism has been in a state of crisis for years now. We’ve not yet recovered from the effects of 2008. This is what we can expect from the future under capitalism: more crises and more redundancies and austerity. Even if COVID-19 never happened, layoffs would have been inevitable in the future as marketisation and outsourcing have already begun to erode foundations our universities were built upon.

What was true of smaller universities before Covid – namely their struggle to remain financially stable – is now happening to the big ones. This process has only been accelerated by the pandemic.

These redundancies are not a result of a malevolent college administration but are caused by systemic issues and as such are bound to repeat. Naturally, in the time of crisis, it is the workers that suffer the most and are made to carry the burden of austerity. In this case, it will not be the vice-chancellors and senior management of the colleges that will be made redundant. It will be the staff and the students that will suffer – some will be made redundant, the one that remain will be overworked and under constant threat of being replaced by outsourced, casual labour.

The truth is that the university and colleges can only accumulate wealth through the exploitation of workers and by driving down their working and living conditions. Money and resources, supposed to be spent on students and staff, are unnecessarily drained into meaningless activities to appease the affluent class, or otherwise accumulated and further invested in profit-making avenues often unrelated to education. Numerous reports indicate investments of endowments of major colleges in fossil fuels companies, arms manufacturers and cigarette companies.

The University and its colleges, despite having enormous endowments and resources, feel no qualms in attacking working conditions of its staff through casualisations, wage cuts and redundancies. The logic of college bursars that there is no money. On the other hand, when it comes to massively remunerating college heads and investing in properties and shares of unethical companies, the money is always there.

Redundancies at Queens, Trinity and Downing colleges will not be the last- it is only a matter of time before the less well off colleges follow their lead. Therefore, a concerted campaign, between staff at all colleges, is the best chance of winning this fight, of rolling back the redundancies and demanding that the vast sums of money these institutions have, be used to pay the workers fair wages.

The staff at these colleges are discouraged from joining unions, which is the main reason why the colleges have been able to carry them out with such ease. It is understandable that the workers would comply with such disgusting demands, for fear of losing their job and their livelihood. However, now there are hundreds of jobs at stake anyway. Therefore we call on all the staff to organise and to unionise, to join their trade unions and muster the collective strength of the working class in the fight for fair wages and decent working conditions! This is not a one off fight – as we move deeper and deeper into the crisis of capitalism, more and more layers of people will be affected by austerity. We need to show them all the power of an organised workers front!

Students, on the other hand, should offer their solidarity and support. They need to condemn this behaviour from the colleges, write open letters and raise complaints where possible. Students can play an important role and should offer their full support to college and university workers. When the time comes they should join the picket lines and join the staff in their fight.

This is not a new phenomenon. For many years, there has been a constant attack on wages and conditions of the university staff. This is evident through below-inflation pay rise, casualisations, increased workload and redundancies. There have been numerous protests by both students and staff on these issues.

Furthermore, over the years, universities across the country have armed themselves with the necessary administrative and legal procedures to sack their staff easily. Through enacting the shameful Tory anti-trade union law, all legal and organisational channels available with workers and their trade unions to fend workers from attacks are suffocated.

It is the staff, not the bosses, who keep this university running. The response to Queen’s college redundancies was remarkable. Students and Unite the Union jointly struggled against redundancies. As a result of the joint campaign, the college administration converted compulsory redundancies into voluntary redundancies. This was no doubt a win out of a spontaneous campaign, which occurred during a holiday period under lockdown conditions. It proves that through a concerted joint action involving students, workers and trade unions, university bosses can be stopped in their tracks.

This is why we are launching the Cambridge Staff Defense campaign.

Redundancies are happening today at Queens; tomorrow it will be Trinity; the day after Downing, then Kings, followed by other colleges and departments including engineering, history, mathematics, earth science, medical science, geography, divinity, chemical engineering and so on. This madness has to stop.

We urge all students and workers to come together across the university and get involved in a campaign to defend university staff from all forms of attacks from the university bosses and the Tory government.

We appeal to all student bodies including JCR/MCR’s, student societies, activist groups and trade unions to join/affiliate/support the campaign to fulfil the campaign’s objectives.

-Halt any current processes of making involuntary redundancies, including at Queens, Downing and Trinity!

-No pressuring workers into voluntary redundancy!

-No attacks on pay and conditions in the university!

-End all college union busting! No reprisals for organised workers! 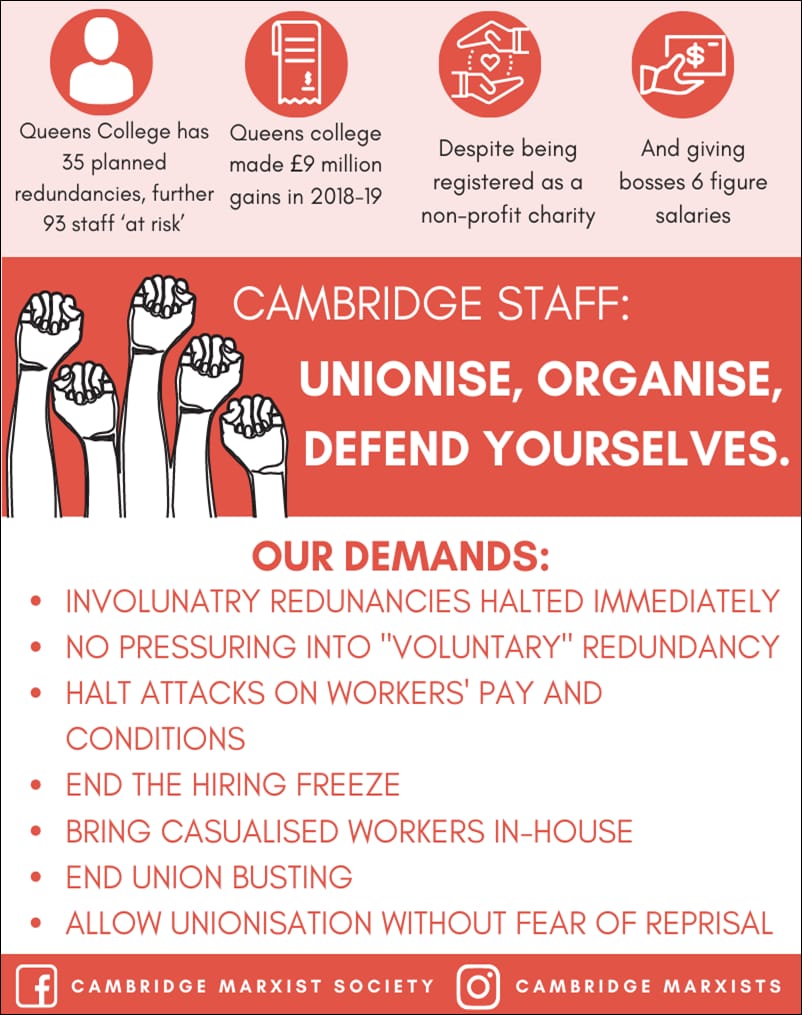 If you want to get involved in the campaign:

Gather information! Speak to workers at your college, find out about planned redundancies and plans to oppose them.

Send an email to Cambridgestaffdefense@gmail.com  or message us on facebook to get involved with the campaign!

Join a union and fight redundancies! 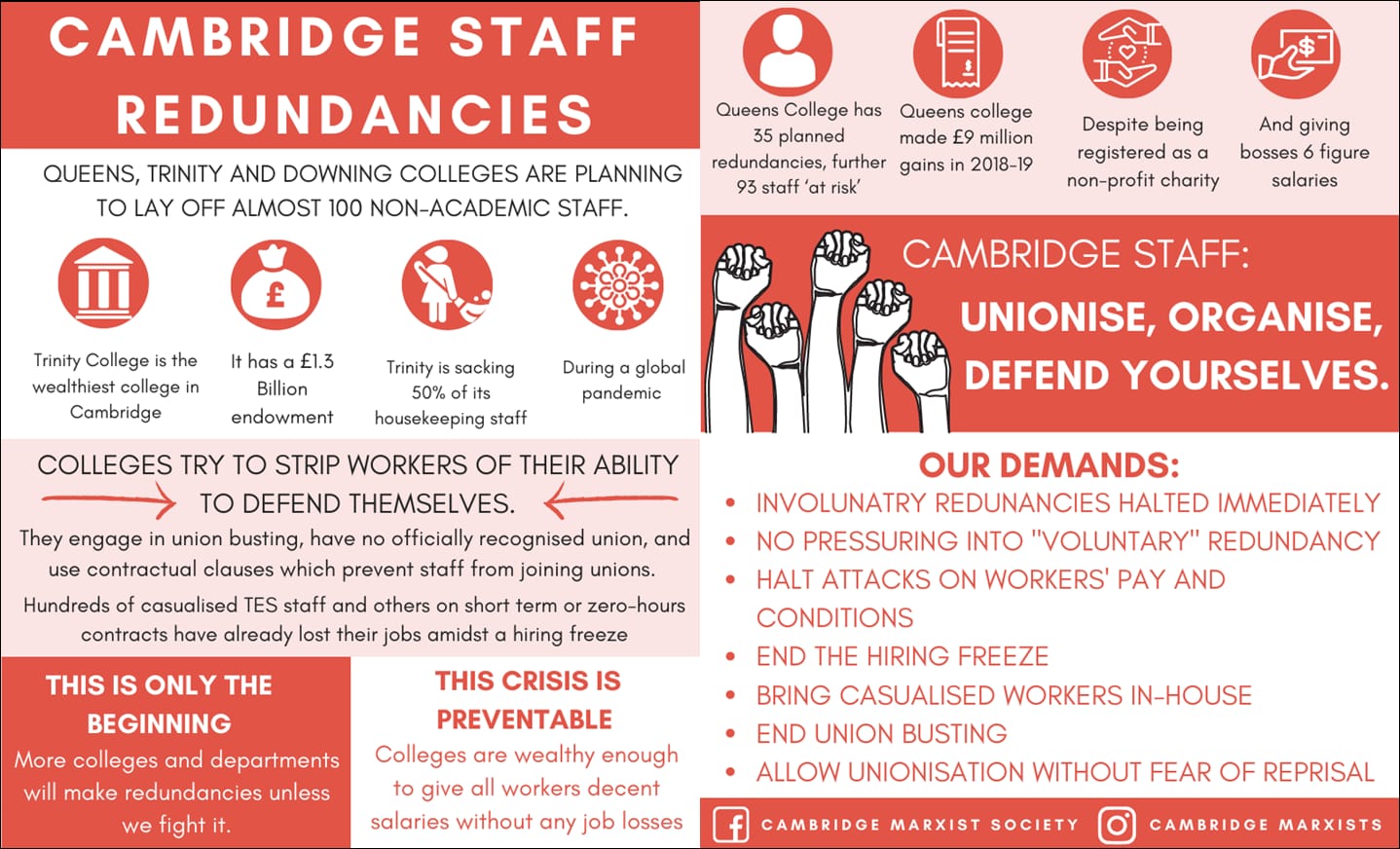